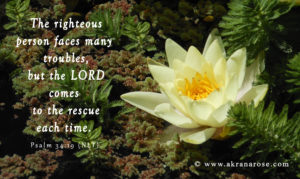 When I was 7 years old we lived in Mokiang (k-pronounced as “j”) China.  The only way to get there was by foot, sedan chair, on horse or mule back.

My Dad enjoyed his work in sharing the gospel in several surrounding villages and wanted to work in the villages beyond Mokiang in an area which was inhabited by savage tribes.  It was just the challenge he had always wanted when he thought of himself as a missionary.  The main compound where we lived had a church, school, and housing for school staff.  We lived in a 2nd story apartment above the church.  I started Chinese school, but after a few months had to quit school to take care of my mom who became sick with what was thought to be tuberculosis.

It was during this time that the Communists started taking over China.  We sent the school children home, closed the school and bolted the compound gates.  Daily we claimed Psa. 34:7 for God’s angel protection.

We kept our gates firmly bolted, then one night we heard someone pounding on the large wooden front gate and calling our gateman’s name.  We could hear him talking and then the large wooden bars slid open our front gate to the sound of soldiers coming, loud talking, coughing and banging of rifles and back packs hitting the floor in the church below. In the morning Mr. Feng told my dad, “I had to let them in peacefully or they would have fought their way in.”  Come to find out, many of the men from our community had joined the Communist Party.  Later that day the officer in charge told my dad and Mr. Feng that we were under their protection.  It wasn’t long before the school desks became beds for the wounded.  After that our gate was open every day and one of the communist units would often come and practice their songs and marches on the school grounds.

From our living room window we could look down the hill to the valley below where the walled town of Mokiang was located.  For days and nights the battle was on with Communists trying to take the city.  The sounds of guns and boom of the canon along with the screams of people were frightening.  Then when the city started to burn, it was an even more scary time for us, yet we had a peace, knowing God had sent his mighty  angels.

One of the nights I was sure I saw a spark of fire go out as it cleared the top of our wall.  It gave me the assurance that the angels were truly surrounding and caring for us.

A few months later we left with a unit of Communist soldiers to escort and protect us from bandits that roamed the country.

I pray daily for each person that reads what I have written.  I also ask that God will bless you and give you a firewall.  We don’t know what the future holds with things deteriorating in our country and around the world.

Below I have added several promise texts to claim and be assured God is answering your prayer for protection.  I have memorized the 91st Psalm and repeat it every morning as a promise for my family’s physical protection.

I also added a song sung By Bob Stromberg—based on Psalm 121 – From Stream Mountain Music.  That also gives a lot of reasurance of God’s care for us. 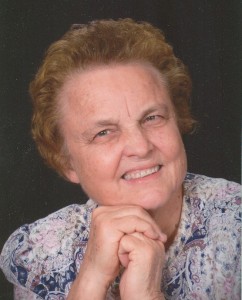 2 Timothy 4:18   And the Lord will deliver me (our family) from every evil work and         preserve us for His heavenly kingdom. To Him be glory forever and ever. Amen!

Psalm 34:7  The angel of the Lord encamps all around those who fear Him, And delivers them.

2 Thessalonians 3:3  The Lord is faithful, he will strengthen and protect you from the evil one.

Zechariah 2:5 (NLT) Then I, myself, will be a protective wall of fire around Jerusalem,” says the LORD. “And I will be the glory inside the city!” 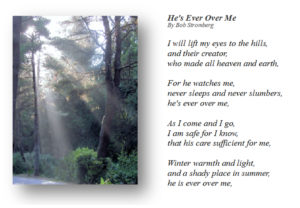 Song: By Bob Stromberg—based on Psalm 121

Note:  If you are not receiving my monthly encouragement messages, but would like to automatically get my blog, sign in. Click HERE.  Your email will not be shared with anyone else.

Note:  If you are not receiving my monthly encouragement messages, but would like to automatically get my blog, sign in. Click HERE.  Your email will not be shared with anyone else. 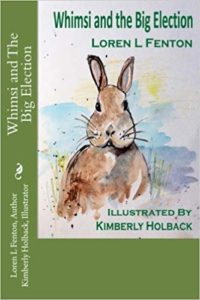 Clicking on this pic will take you to Whimsi's page on Amazon.com. There are two (2) editions available there, one in paperback, one for Kindle.